As a solider with the 104th Infantry Division during WWII, 18 year old Pfc. Bryce Thornton found himself disarming mines and booby trapped buildings across Europe until war’s end. He cleared explosives from a notorious bridge, assisted in the liberation of a Nazi slave labor camp, and befriended a 6 year old boy whose name, when mentioned, brought tears to his eyes more than 70 years later.

As a young draftee from Ohio, Thornton journeyed more than 2000 miles by train to his new home, Camp Callen, in southern California. It was here that he was assigned to the 415th Regiment, Anti-Tank Company, 4th Platoon and given the job as a specialist in explosives. In the Timberwolf Division they were known as the “pioneers.”

Private Thornton spent his first year training in different locales. He participated in desert maneuvers in Yuma, Arizona and continued training at Camp Carson in Colorado. In the summer of 1944, deployment orders arrived. He was headed to France. 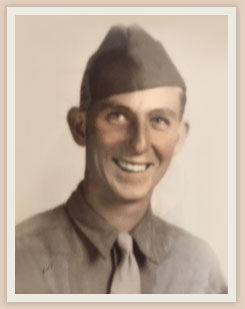 Boots on the Ground

Withstanding the 10 day Atlantic crossing was a challenge; boredom and monotony ruled the day. Thornton opted for KP (kitchen patrol) and was assigned to the Officers’ mess hall. Of course KP duty was laughable to his company mates but “after seeing that I ate the same things the Officers ate, they wanted my job,” he recalled.

In September 1944, the Timberwolf Division landed in France. The 415th arrived on Utah Beach a few months after the D-Day invasion. The remainder of the Division disembarked at the port in Cherbourg. 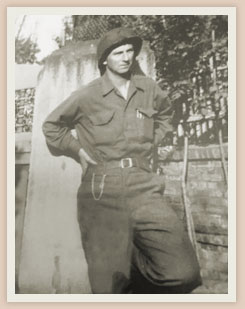 Thornton’s unit traveled to assume defensive positions near the Belgian-Dutch border on October 23, 1944 and waited for word to attack. The wait wasn’t long as combat for the Timberwolves began on the 25th near Wuustwezel, Belgium. They were positioned in the northern sector during the Battle of the Bulge where they endured sub-freezing temperatures during one of the coldest winters on record. “Conditions in Belgium and Holland were miserable, Thornton remembered, it was rainy, chilly, wet, and muddy. With water tables less than one foot, digging foxholes and staying dry was a challenge.” The GIs often went days soaked to the bone and slimy with mud.

The Germans made heavy use of mines and booby traps in their efforts to thwart the advancing Allies. Thornton helped clear the famous Ludendorff Bridge at Ramegan; spending days purging the 3-span bridge of explosives. He confessed that it was ticklish at times but it was his job to rid the area of the deadly ordinances.

When asked about disabling mines in open fields where the prospect of enemy sniper fire was real, Thornton reflected and said, “I focused on what I was doing, leaving safety in the hands of the soldiers who accompanied me.” Stolberg, Germany was the most nerve-racking experience for Thornton as the Nazis booby trapped nearly every house in the industrial city before retreating.

The grim realities of war would continue to play out as the 415th marched toward Berlin. In April 1945, teamed with the 3rd Armored Division, Thornton and his comrades entered into the hell of the Mittlebau-Dora concentration camp. What they found there would haunt them for the rest of their lives.

More than 5,000 corpses were stacked like firewood in the shadow of the crematorium. The surviving prisoners wrapped their emaciated arms around the GIs, kissing them, and thanking them with words that needed no translation. They thought they would die working in the tunnels of the Nordhausen camp. Now they were free. “It was brutal all the way around, Thornton said. You could literally count every rib in their bodies.” The 415th stayed in Mittlebau for only a few hours but the horror they witnessed was seared into their hearts and minds forever.

Near the end of the war, Thornton and the 415th found themselves in Bitterfeld, Germany. It was here, nearly 90 miles from Berlin, that the Timberwolves would learn of Germany’s surrender. The war was over. For Pfc. Thornton, relief and a “thank you, Lord” washed over him. He made it through without any serious injury and would be going home.

Before he shipped out, Thornton would befriend a young boy named Hans. For some unexplained reason, the little one pierced the heart of this combat hardened soldier. Thornton gave extra helpings of food to the precocious 6 year old and a treasured commodity…his time. Hans lost his entire family during the war and lived in an orphanage blocks away from where the 415th was bivouacked. The special time they shared together stayed with Private Thornton throughout his life. He would often think about the little boy from Germany. 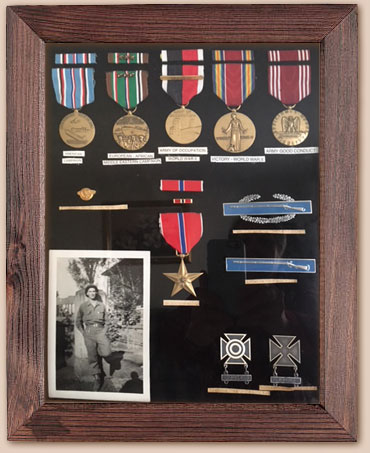 Upon returning home, Bryce Thornton did what most other WWII veterans did. He got on with his life and buried his war experiences deep inside him. Thornton worked in his father’s paint contracting business for a while once he got home. He ended up taking a job with the Bureau of Prisons which is how he eventually made his way to Tallahassee. Bryce married his lovely Helen 64 years ago. They met early in life while attending the same Sunday school class, reacquainted after the war, fell in love, married, and started a family.

In 2003, Thornton and his family toured some of the battlefields in Europe, retracing the steps of the 415th. While in Bitterfeld, unbeknownst to Thornton, his son asked the museum curator if they knew the whereabouts of any of the local children who survived the war. At the suggestion of the curator, they posted photos in local newspapers and waited to see if they’d get a response. He kept his father in the dark while searching; waiting to see what would transpire.

As luck would have it, the Thornton’s returned to Bitterfeld the following year to attend an anniversary celebrating the city’s liberation. The gathering in the town hall exceeded capacity. Thornton remembers hearing his name called inviting him to come forward. A local official asked about his experience during the war and mentioned his meeting with young Hans. When questioned whether he’d like to meet Hans one day, Thornton wholeheartedly said yes. Immediately, up the center aisle, ran a middle-aged man who remembered the kind soldier who had paid special attention to him as a young child. It was Hans. Both men relished the embrace and the tears of joy from having found one another. They did stay in touch, meeting again in 2006, until Hans’ death in 2008.

Honor Flight Tallahassee bows to the sacrifice and service of all our military veterans. Each one has their own personal story. Each story needs to be told. We salute Pfc. Bryce Thornton, Pioneer in the 415th Regiment, 104th Division.